Propolis is one of the least known products of a bee hive and the least understood by those who have heard of it. It is said that Aristotle coined the name Propolis meaning “defender of the city”. You will shortly see why he called it that. 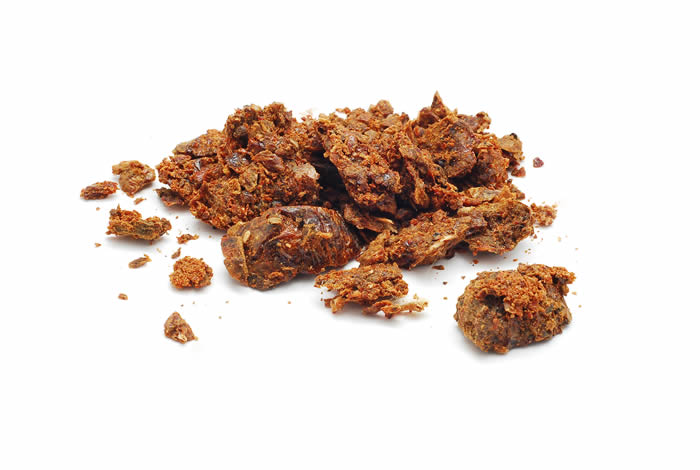 It is a sticky resinous goo collected from the buds of some trees and sap. It is brittle and fragile when cold, so in the warmth of the hive it remains workable for the bees. They use it to sterilize the container in which they have built their comb. They also entomb objects too large to be moved out, including intruders such as mice. The resin is mixed with the saliva of the bees and applied liberally throughout the hive to surfaces not used for building comb. In a beekeeper’s hive, this will include the frames holding the comb and can be a bit of a nuisance when inspecting the hive as the frames are all stuck together and difficult to separate and remove.

There have been many claims regarding the health benefits of propolis going back to the earliest days of beekeeping. We do not claim to have any special knowledge of skills in the area of health care, so we will neither support nor debunk the claims of health benefits, but we will examine some of them here for your information.

The resin is gathered and packed in the bee’s pollen baskets and brought back to the hive where it is used to coat the cavity and glue everything together. When it is ready for use propolis consists of a large number of compounds which include caffeic acid, acetin, ketone and benzoic acid, which are known to combat inflammation and infection and histamine reactions and is also loaded with Bioflavonoids.

It has been claimed that these ingredients heal leaking capillaries and blood vessels, attack viruses and some otherwise resistant bacteria. Propolis is also said to heal gums, burns and infections. Some even say that it kills cancer cells. Needless to say these claims still need to be proven but some people may wish to give it a try. Don’t forget to check with your doctor or qualified relevant health professional before doing so. We are all different and you may react differently to your friends and family. If you are allergic to bee stings, you will be allergic to propolis.

Most beekeepers know what bee space is. For those who do not know, it was discovered by Rev. Langstroth (the inventor of the Langstroth hive) in the mid eighteen hundreds and simply put, it is the ideal space in a hive. Less and the bees cannot use the space, more and they will fill it with comb. It measures between a quarter of an inch to three-eights of an inch or for you modern beekeepers it is between 0.635cm and 0.9525cm.

Many beekeepers see propolis as something which the bees use to glue things together, but others see the glue aspect as a side effect of the main use which is to seal and sterilize the interior of the cavity. When bees build a hive in their natural environment they would most often be in a hollow tree if there was a suitable one available to them. They would line the hollow with propolis to prevent moulds and pests from causing health issues or comb decay etc. in the colony and comb. Even though beekeepers tend to maintain their hives for the bees they still start the process of propolising the boxes as soon as they move in. It is also used to polish the cells intended for brood and food storage, leaving them sterile and safe to use and reuse.

Something that surprises many is the fact that they also propolise the outside of the entrance to the hive. The dark area on the landing board/area is not just caused by the dirty fees of the bees entering the hive. The area is propolised to prevent them from dragging in foreign bodies on their feet after a session of foraging. Anything that is not killed immediately by the propolis will probably stick to it stopping it from getting. A bit like those mats we all walked on as we entered shops and other businesses when foot and mouth disease was going around in 2001.

It is now possible to buy some modern products with propolis added to them such as toothpaste.

It is also said that the well known violin maker Antonio Stradivari used propolis as a preservative on his famous instruments.

Japanese scientists have been doing a lot of research on the effectiveness of propolis in fighting cancer and claim to have promising results. Apparently, the best results come from the propolis they get from Africanized Honey Bees in the jungles of Sao Paulo Brazil. (Maybe they have not tried the propolis from the west off Ireland yet ;-)) Apparently, the beekeepers in Sao Paulo are focusing their efforts to supply the demand for their propolis instead of honey.

Even Hippocrates, of the Hippocratic oath that doctors take, wrote: “Pollen is for health and propolis is for life!”

It has been claimed that propolis could help treat asthma, allergies, arthritis and joint disorders, eczema and dermatitis, ME, MRSA, viral infections including HIV and even cancer, though it is highly recommended that you continue to attend your doctors and follow their recommendations and keep them informed of any other treatments that you are following.

The Bees Need Your Help!

Do your bit for the environment. Join a beekeeping club today and support our pollinators.