Swarming is the only means of reproduction for a honey bee colony. It is achieved by the old queen leaving the nest with a large proportion of the bees after the colony has made provision for new queens to be raised to replace her. This ensures the reproduction and survival of the parent colony.

It is a common failing with beekeepers to attempt to control swarming without understanding the process. This is simple to learn, is usually very reliable, and is as follows:-.

Day 0. The first egg is laid in a queen cell cup with a number of eggs laid in other cups in succession over several days. For the purposes of swarm control, it must be assumed the first egg will be the most advanced in all stages and be the first queen to emerge.

Day 3. The first egg will hatch into a larva.

Day 8/9. The first queen cell is sealed. This is usually the time you should expect the swarm to issue, but it may be held up due to poor weather or timing. Other queen cells will be sealed in succession. 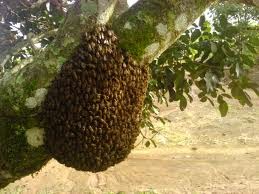 Day 15/16. The first virgin queen will emerge and one of two things will happen, either:

The above is what generally happens but there are some occasions when bees don’t do what is expected of them. This may be to vary the above timings by a day or so or to swarm before the first queen cell is sealed. Experience will help beekeepers observe such situations.

There are two main reasons why we should prevent a colony swarming if possible:-

It is considered irresponsible to leave bees unmanaged and let them swarm at will. The responsible beekeeper will take steps to prevent it and use one of the accepted methods of swarm control.

There is absolutely no point in attempting to control swarming without the knowledge of what the bees are trying to do. All methods of swarm control will be attempting to disrupt the swarming process in some way.

A swarm issuing from a hive generally clusters near the hive before moving off to its new nest site.

Factors that will help prevent swarm preparations by a colony include:

Marking and clipping the queen

Many swarm control measures involve finding the queen. This is much easier if she is marked on her thorax with paint or a numbered disc. Clipping about a third off one pair of the queen’s wings stops her from flying far. She may come out of the hive and attempt to fly but may drop to the ground where she will either go underneath the floor or settle on the ground with a small group of bees. The queen may be lost but the swarm isn’t.

Clipping shouldn’t be seen as a method of swarm control, only a delaying tactic by increasing the maximum time that can be left between inspections.

When the colony is expanding in the spring, make more room by adding a queen excluder and super in advance of their needs. It is probably better to super too early than too late. Experience will tell you when that should be, otherwise seek local advice. Those in an early area where they may have oilseed rape growing locally may need two supers.

Bees need room for themselves and to store nectar until they evaporate water from it to turn it into honey.

The swarming season varies considerably from one year to the next. It depends on the weather, the state of the colonies, and the part of the country. Generally swarming is likely between late April and July. Inspect the brood nest of your colony every 7 days if you have unclipped queens, or 7- 14 days if you have clipped queens. Many beekeepers can only tend their bees at weekends and find it convenient to make inspections on a weekly basis. This ties in with the life cycle of the queen and enables you to take measures in time to prevent (or have a chance to prevent) swarming.

During the summer, a colony usually builds queen cell cups or ‘play cups’.These are the start of queen cells and look like an acorn. If you find these, it does not necessarily mean that the colony is preparing to swarm. Check these cups every time you inspect a colony. Swarm control measures should begin when queen cells contain eggs or young larvae.

If you are sure that she has gone, check through the brood box to make sure that there are eggs or young larvae in worker or queen cells. If so, remove all the sealed queen cells and those containing large larvae. Leave those containing eggs or very young larvae. This should ensure that no swarm will issue for around 8 days with the first virgin queen to emerge. Gently smoke each comb or gently pat the bees with an outstretched hand to move them so that you can see all parts of the comb. Pay particular attention to the edges of the comb and any gaps as bees will often hide queen cells at the side or bottom bars or near holes. Check again in 7-8 days’ time and follow the steps from 9 (below) onwards.

If all the queen cells are unsealed, inspect again after 7 or 8 days and follow the steps from 9 (below) onwards to allow the production of one good queen.

If the old queen is present

Do not open up the original colony that is raising a new queen for at least 14 days. If the young queen is on her mating flight, she may be confused when she returns to find the hive open and may fly into an adjacent colony or get lost.

Vital inspections that cannot be avoided should take place after 5 pm when the young queen is likely to be inside the hive. When you do inspect to check if your new queen is laying, try to do so quickly. Look for a patch of eggs or very young larvae, failing this check for an area of cells that have been highly polished by the workers ready for the queen to lay in. Close up the hive, be patient, and check again in a few days. A young queen will generally start laying 10–14 days after she emerges, longer in poor weather or in a larger colony. If your new queen has not started laying after three weeks, seek advice from an experienced beekeeper, as she may have been lost or failed to mate.

When your queen is laying check the sealed cells to make sure it is worker brood, with even, flattish cappings. If you find uneven domed cappings with the comb misshapen, your new queen has probably failed to mate and is laying unfertilized drone eggs. Seek advice about replacing her as soon as possible or your colony will dwindle and die out.

A nucleus is always a useful item in even the smallest apiary. It can be used for many things including increase or providing a queen in case one needs to be replaced. This method of making one is good, but if you don’t want to increase your total number of colonies, the nucleus with the old queen can be united back to the original colony with the new queen. It is best to do this in the evening when flying is reduced.

When queen cells are seen:-

The information provided is designed to guide you. Contacting an experienced beekeeper for advice and assistance is always preferable.

The Bees Need Your Help!

Do your bit for the environment. Join a beekeeping club today and support the bees.