This method will hopefully maintain the maximum amount of foraging bees with the queen who can continue to lay eggs without interrupting the honey flow.
If during an inspection you see a queen cell (unsealed) containing larvae, it’s time to carry out an artificial swarm procedure.

When a queen cell is found do not shake any bees off the comb because this is likely to damage or injure the developing queen. Gently push the bees aside with your finger or use a bee brush so you can see the whole comb and look to see if there are more queen cells. After checking each comb in the brood box, note which frames have queen cells. This can be done by making a mark on the top of the frame directly above the cell.

The roof, supers and queen excluder would have already been removed, so in order to carry out the artificial swarm procedure you will need an extra brood box and floor, full set of frames with drawn comb or foundation, crown board and roof. (It is a good idea to keep an extra hive setup in the apiary if you are considering an artificial swarm).

1. Move the original hive with the brood, bees and queen about one metre to one side of its original location with the entrance facing the same direction.

Move one metre from original location 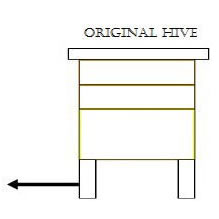 set supers, queen excluder to one side

2. Put the new hive (complete with frames) in the place where the original hive was.

Remove a frame from the centre of the new hive and put it to one side.

4. Ensure there are food reserves on the combs of the original hive and replace the removed frame with the one we took from the new hive.

This hive is now left with nursery bees, queen cells and some foraging bees. Replace the crown board

5. Put any supers you took off the original hive on to the new hive replace crown board queen excluder and roof. 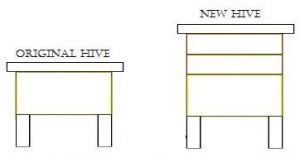 This procedure has now produced an artificial swarm, giving you another colony and without the loss of honey production.

8. After seven days, usually one day before the new virgin queen is due to emerge from the cell, follow these guidelines: Move the original hive to the opposite side of the new hive. Move it at least a metre further than the new hive. If you have room move it to the opposite end of the apiary as far away from where it was as possible.

The flying bees from this original hive will return to find their home missing and will go to the nearest hive, which will be the new one (in the original location). This will help build up the loss of bees in the new hive and will encourage the growth of the colony. This also reduces the risk of a cast swarm, because it leaves fewer flying bees in the original hive. (The purpose of the second move is to deplete the original hive of bees, by doing this the bees will decide which queen cells to destroy and most important the queen cell to let hatch out. It is therefore the bees that decide on the new queen not the beekeeper)

9. Check the new hive to see if the old queen has continued to lay and that there are no new queen cells.

10. After two to three weeks check the original hive to see if the new queen has been mated and is laying (It could be up to a month before she begins to lay). If there is no sign of eggs or larvae after the month be prepared to re‐unite the two hives. This can sometimes happen if the queen cannot fly to mate. Once you know the queen is laying in the original hive you can increase your number of colonies, make nukes etc.